In ancient Greece and Rome, surveyors were highly respected individuals as they were responsible for the perfect lines and angles in some of the breathtaking buildings and coliseums that still stand today.

They used a tool called a Groma; comprised of a vertical staff with a cross bar that was used to survey lines and right-angles. The Groma is believed to have originated from about 400BC in Mesopotamia, and may have been imported by the Greeks in the 4th Century BC. 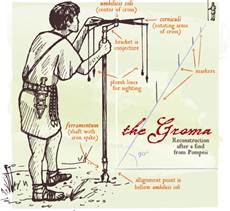